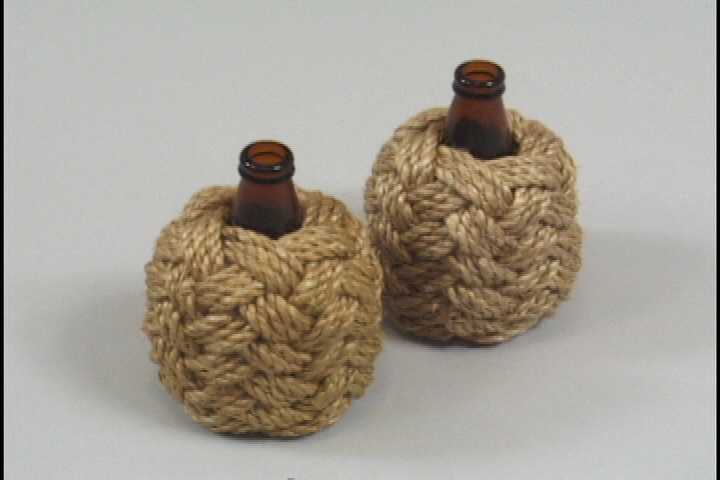 Pictured above is a "Pineapple Knot". Years ago, I made quite a number of these, and they proved very popular. I called them "Heidelberg Specials" because I used to jam the knot, which contains 50 feet of 1/4" manila rope, down over a unique Heidelberg beer bottle known as a "keg botle". Keg bottles are no longer available, but I still have a few left. When my keg bottles run out, I will probably turn a wooden "bottle".

They make nice candle holders and flower vases, and are right at home on a boat or in a room with a nautical theme.

The Pineapple Knot falls within the general group of knots known as turksheads. What is unusual about it is that it is actually 2 interwoven turksheads, the first one most often being a 7 part, 6 bight knot, and then the 2nd, with 5 parts, and 6 bights, being tied within the structure of the first. Unlike some other turksheads, the Pineapple Knot is well suited to being tightened down over a generally spherical object, and with care, will close down to the point where it will almost entirely cover such a shape. It is a knot much used by leather braiders, but is less widely known among ropeworkers.

I have recently decided to revive my Pineapple Knot manufacturing business. Each of the limited number of genuine Heidelberg Specials which I can make, with the few bottles I have left, will be sold for US$50 each, plus shipping.

Price of the same knot, on a turned wooden core, has yet to be determined.

Each one carries a tag stating that it was hand made by me.

I made a couple of larger knots of the same pattern for one chap, and tightened them down over large pickle bottles. The buyer made them into a pair of table lamps, which he still uses, almost 30 years later. These larger knots take much more time, and would be proportionately more costly.

I have also made quite a number of paperweights using this knot, tied in leather. The nice flat calf hide lacing I used to use seems to be unavailable today, but I can also do them in rawhide, heavy linen thread, tarred nylon net twine, etc. If you want one, I can make something like this for you on a custom basis, particularly if you have a nice egg-shaped (and approximately egg-sized) rock . Contact me for details. 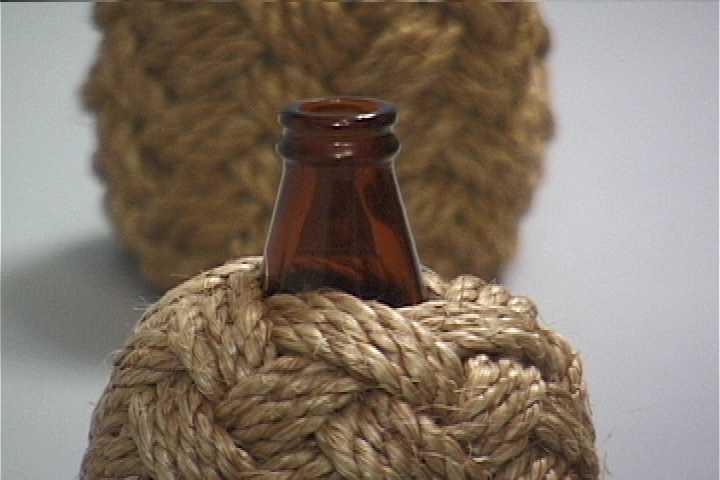